Apple made the AirTag — the tech giant’s long-rumored item tracker — official on Tuesday, April 20. Up for preorder Friday, April 23, the device is a relatively affordable $29 for a single AirTag or $99 for a pack of four.

We spent about a day with five AirTags during what turned out to be an extra-clumsy, perhaps loopy, testing adventure. Overall, its integration within Apple’s Find My network delivers a wide coverage map, and thus far, location accuracy of the tags has been highly accurate. Combined with turn-by-turn directions to lost items make them something of a necessity for anyone who misplaces their belongings.

Fast pairing with an iPhone for an easy setup 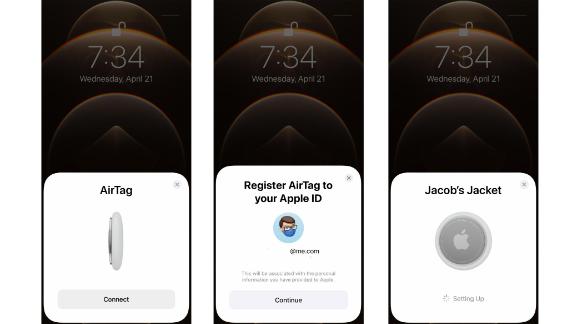 Like AirPods or the Apple Watch, AirTag is designed as an iPhone accessory, and setup is done in under a minute. Just hold your AirTag next to your iPhone and it will automatically prompt the setup window. You’ll name the tag and it will sync with your Apple ID. And, well, that’s really it. 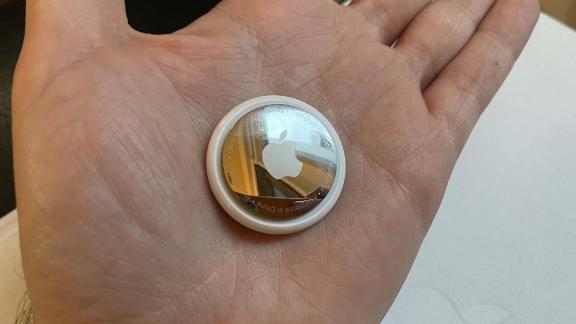 This item finder is connected to the Find My network, the same one Apple users should be accustomed to to track lost laptops and phones. That network is made up of nearly a billion Apple devices (iPhone, iPad, iPod Touch or Mac) that can pick up on the Bluetooth signals cast from the AirTag. You’ll be able to see the location of your AirTags at any time within the Find My app. It’s all private, anonymous and end-to-end encrypted, which means the location of your AirTag can’t be seen by others.

So let’s say you’re walking through a park and have an AirTag on your jacket. You stop for a bit at a picnic table, take the jacket off and get up without remembering to grab it. Without the AirTag, you might be out of luck. But with it, simply fire up the Find My app on your iPhone and you’ll see its location on your screen, you can ping it so it plays a chirping sound and you can even get directions to it.

Nothing especially new in the realm of item trackers, but it’s really nice to have it built into your iPhone. There’s not even the need to open an app; you can simply ask Siri where your jacket is. And once Siri receives the request, the AirTag will start beeping. It’s just a seamless integration.

Precision Finding is a game changer 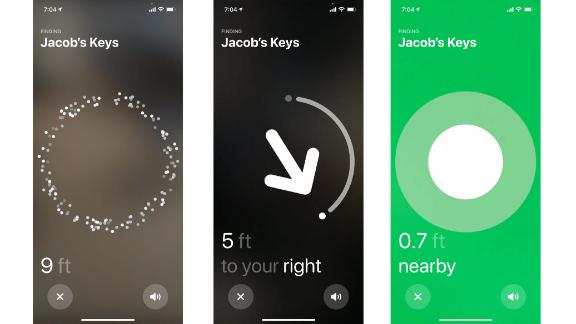 Here’s the most exciting part: If you have an iPhone with the U1 Chip inside (an iPhone 11 or newer), your phone will give you turn-by-turn directions to the AirTag on-screen. With VoiceOver, a built-in accessibility feature, Siri will read directions aloud to help you find it.

Apple calls this Precision Finding, which uses a boatload of technology to get your item back. It’s Bluetooth, U1, ARKit (Apple’s software foundation for augmented reality, or AR) along with your iPhone’s gyroscope and accelerometer. You’ll be presented with the distance away, in feet, and see an arrow on-screen pointing you in the right direction.

While in our kitchen, we fired up the Find My app and selected “Find” on “Jacob’s Keys.” The app then transformed itself into a GPS on a mission to find that item. You’ll see the distance displayed in the bottom-left corner, and as you move around it will start to get a feel for where you are in relation to the AirTag. You can also play a ping on the AirTag with a tap — and, in some cases, it may ask you to turn your flashlight on for more light. As you begin to move around your space, it will present an arrow and instructions — directions like 8 feet to your right or 20 feet behind you. But as you get closer to the item, the app will give you more exact locations and track the distance away, and very accurately in our experience.

And the real secret piece of hardware here is the U1 Chip, which enables the ultra-wideband network. It gives the iPhone insight, spatially, as to where the AirTag is and powers Precision Finding. It’s kind of like a personal GPS — and, no, not like the one that caused Michael Scott to drive into a lake; it’s just for helping you find items. We’re looking forward to testing this in more locations as we prepare our full review of Apple’s AirTag.

A simple yet capable device 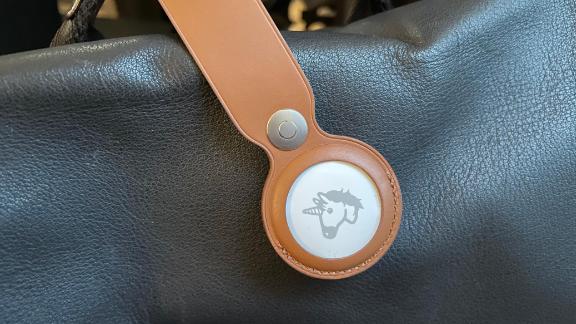 The AirTag is pretty unassuming — it’s a small white disk with a white plastic side and a stainless steel side that features an Apple logo. You’ll find a few markings (like Bluetooth, U1 and “designed by Apple” language), but it’s pretty minimalist.

Apple will let you engrave the front with an emoji or with four characters at no extra cost. If you’re getting the four-pack for a family, it’s an excellent route to ensure you don’t mix up AirTags.

Inside the AirTag is a solid amount of technology. There’s an accelerometer sensor along with a U1 Chip and Bluetooth. Connectivity is rounded out with Near-Field communication (NFC), and it serves an important purpose. For instance: What if someone finds your missing item and wants to return it? Well, they can tap the AirTag with any NFC-capable device that takes you to a webpage. From there they can contact the owner of the tag — but this only happens if you’ve marked the AirTag as lost within the Find My app. You’ll have the option to share a name and phone number for the person who finds the AirTag as well.

And since the AirTag might end up in some sticky spots, it’s rated IP67 for resistance against dust and water. That rating means it can handle being submerged in a meter of water for 30 minutes. On the subject of battery life, Apple is promising a year from the battery. It is easy to pop the back off, with pressure, to replace the battery, though. Unlike other Apple products, this is a user-replaceable battery. It’s a standard CR2032 battery — likely one that you can grab from your local convenience store or pharmacy. 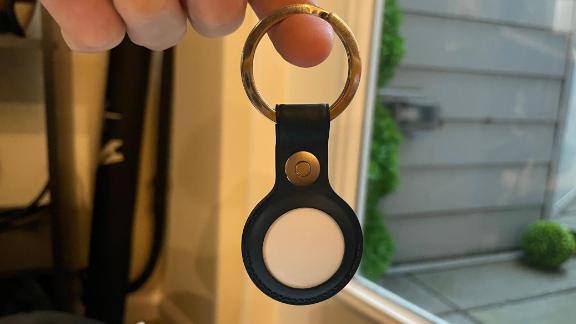 AirTag is easy enough to bring with you, but you’ll need an accessory to attach it to something. Unlike some newer Tile trackers, there isn’t a built-in adhesive or even a spot for a key ring. Apple is quick to the rescue here, though, with several accessories.

All of these house the AirTag quite nicely, and we especially like the loops, as you can determine the length, making it easy to wrap on a backpack strap or piece of luggage. The Leather Key Ring is, you guessed it, great for a set of keys. We’ll report back on these a bit more in our full review. Nomad is already taking preorders for a strap that attaches to glasses, and Belkin has a cheaper key ring offering.

Apple’s even offering a Hermes leather buckle edition of the AirTag, but it’s pricey at $449.

Here’s the scoop on AirTags — if you have an iPhone and are in the Apple ecosystem, they make a whole lot of sense. We’re all getting ready to go back out into the world, maybe even planning some trips, and this is a super-simple way to keep track of things.

The privacy of the Find My network gives us more breathing room in comparison to other trackers, and Precision Finding, which enables turn-by-turn directions to your item, is quite literally a game changer. You will need an iPhone with the U1 Chip to take advantage of it, though.

After a day of testing, we’re pretty happy with AirTag and think it packs a big punch with value. We’re going to be testing the devices a bit more (and misplacing items for a few more days). Stay tuned for our full review of Apple’s AirTag next week.